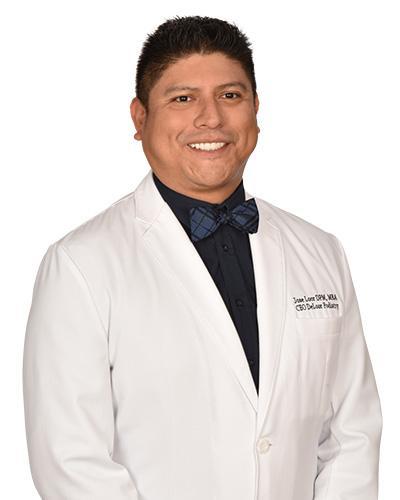 Dr. Jose Paul Loor is an expert in treating diabetic foot deformities, ankle trauma and disorders, sports or athletics injuries, arthritis, flatfoot, bunions, hammertoes, and various other foot and ankle ailments. As an Army surgeon, he has extensive experience in joint distraction, a new technique which uses external fixation to preserve ankle and toe joints and prevents the need for fusion or replacement. Dr. Loor performs minimally invasive surgery techniques to correct diabetic Charcot foot, traumatic ankle and foot fractures, and dislocations and to lengthen the metatarsals and toes for patients with Brachymetatarsia.

Dr. Loor is known internationally for his expertise in treating foot and ankle deformities. Throughout his career, Dr. Loor has been awarded numerous grants, published medical research in national and international journals on foot and ankle research, and has participated as an invited lecturer at dozens of medical conferences, meetings, and symposia. Dr. Loor is the founder and CEO of the super podiatry Group in the NY/NJ Metropolitan area known as DeLoor Podiatry Associates to keep New Yorkers on their feet. Dr. Loor was voted “Top Doctor” in New York magazine numerous times and appeared on the television show in Univision to discuss foot and toe lengthening, and trauma on military members.

Dr. Loor is a proud graduate of Aviation High School and Air Force Junior ROTC Detachment NY 932. His Bachelor of Arts in Natural Science (PreMedical) was conferred at Fordham University where he attended Senior Air Force Reserve Officer Training Corps at Manhattan College Detachment NY 560. Dr. Loor delayed his military commission to become a proud alumnus of The New York College of Podiatric Medicine at Touro College where he earned his Doctorate of Podiatric Medicine as well as completed his 3 Years of Surgical residency training in the same alma mater, where he rotated at NY Health Hospital Corporations owned Metropolitan, Lincoln And Harlem Hospital. He completed his AO Trauma preceptorship at NY Columbia Presbyterian Hospital. After his medical training, he earned his Executive  Master in Business Administration from Adelphi University in healthcare. Dr. Loor took workshop surgical courses with AO Trauma, Diabetic Limb Salvage, Limb Deformity Correction Institute, The Podiatry Institute, American College of Foot and Ankle Surgeons, and American Society of Podiatric Surgery. He is Board certified in the Multi-Specialty boards in Podiatric Surgery, Medicine, and wound care and via the American Board of Podiatric Medicine. He is Board Qualified in the American Board of Foot and Ankle Surgery. Due to his interest in developing DeLoor podiatry, he studied and earned his Executive Certificates from Wharton Business School/University of Pennsylvania Medical School, Harvard School of Medicine Columbia Business School, and Cornell University in the Business of Healthcare, Digital Marketing, Strategic Healthcare Leadership, Public Health.

After receiving his recommendation to regain his commission from the National Commander of Podiatry at Keller Hospital from the US Military Academy at Westpoint, Dr. Loor as a commissioned officer at the rank of Captain has persevered throughout his military career with the Medical Support Unit 7202 of the United States Army Reserves in Shoreham, New York. He has had a breadth of training ranging from courses in Captain Career, Basic Officer Leadership, Company Grade Officer Leadership Development Course and several courses on military readiness, courses in Podiatry and Joint Staff Operations Security and Joint Staff Law of War. He has also taken part in Health Services Plans, Operations, Intelligence, Security, and Training at AMMEDD headquarters at Fort Sam Houston. A very challenging course of Medical Readiness Administrative training and Healthcare Operations Management Training and Deployment at Madigan Medical Center JBL Lewis McChord. The core competencies that he has ascertained through his military career show him to be a very unique and specialized, well-rounded Podiatrist that is well rounded with the utmost knowledge and expertise in many areas, especially Trauma. As an avid, diligent military reservist he has gained skills that have contributed to his expertise in the field of Podiatry. He has also worked with advanced technology in the military and is able to use that expertise to strengthen the field of Podiatry. He was the youngest member of the faculty at the New York College of Podiatric Medicine in the Surgical and Medicine departments. He currently is licensed in NY, NJ, CT, PA, FL, and CA as well as Ontario. He is a husband, father, brother, son, and uncle to the House of Loor.

Kindly call the office, should you have any questions or concerns